William Wilson Corcoran, a Washington, D.C. based merchant and banker, founded the Corcoran Gallery of Art in 1869. Corcoran began his gallery with much of his own collection, which formed one of the first major, publicly accessible art collections in the nation's capital. The gallery - originally housed in a building on the corner of Pennsylvania Avenue and 17th Street NW - was a draw for D.C. residents, visitors, and even aspiring artists.

By the 1870s, semi-formal lessons were being offered by artists in the gallery. In 1878, Corcoran decided to donate additional funds to the institution to found an art school associated with the gallery. At the time of Corcoran's death in 1888, the gallery and the school had outgrown the James Renwick designed building on Pennsylvania Avenue.

Using raised funds and the proceeds of Corcoran's estate, the Corcoran Board of Trustees oversaw the construction of a large Beaux Arts building on 17th Street, three blocks from the original Renwick gallery. This new building, designed by Ernest Flagg, opened to great fanfare in 1897 and absorbed both the gallery and the art school. The building - and collection - expanded again in 1928 with the acquisition of the William A. Clark collection.

The school continued to evolve, receiving accreditation with the National Association of Schools of Art and Design (NASAD) in the mid-1970s. In 1999, a reorganization brought about a new name: the Corcoran College of Art + Design. In 2014, as the Corcoran Gallery ceased operations, the school became part of neighboring George Washington University's Columbian College of Arts and Sciences. At that time, the university committed to maintaining the original Corcoran mission to support the arts and assumed responsibility for the necessary renovations to the building. 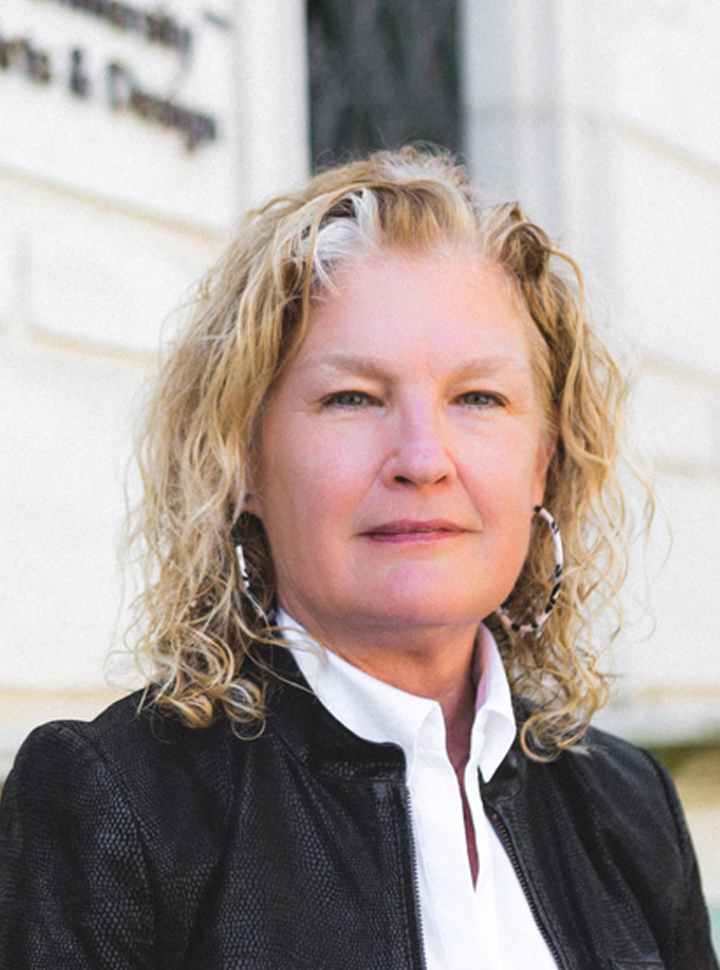 In 2015, Sanjit Sethi, a practicing artist and nonprofit leader, was named Corcoran’s director and guided the school into a new chapter. In 2017, several GW departments joined the Corcoran School, creating a new cultural hub in Washington, D.C. Kym Rice succeeded Sethi in 2019 as Interim Director. Rice, a well-respected Museum Studies professor, worked closely with faculty members to elevate the arts at GW and broaden opportunities for interdisciplinary connections across Columbian College.

In July of 2021, Dr. Lauren Onkey became the new director of the Corcoran. Dr. Onkey brings two decades of experience in arts and culture, paired with considerable scholarly achievement in her field. She most recently served as the Senior Director at NPR Music where she led a team of creatives and provided the editorial vision in producing innovative music journalism.

The Corcoran Gallery was founded to house the private art collection of William Wilson Corcoran (1798-1888). Born in Georgetown in 1798, Corcoran was the son of an influential merchant and former mayor. His attempt to start a dry goods business at the age of 19 was a failure, but later success as a financier led to the founding of his own brokerage firm in 1837. In 1840, he and partner George W. Riggs formed the bank Corcoran & Riggs, and within a few years they were doing a booming business as a financial agent of the federal government during the Mexican War. He retired in 1854 to pursue philanthropic work.

Corcoran made his fortune during an era when many successful businessmen and industrialists were investing money to endow charitable and educational institutions such as hospitals, orphanages, universities, libraries and museums. He was also one of the few early patrons of contemporary American art at a time when many American collectors were purchasing European works. In general, he would buy a work for his collection only after the artists had a well-established reputation. His holdings soon came to include a number of American and European landscapes and genre paintings, as well as some sculpture.

Corcoran’s philanthropic efforts continued through his life and, though he never served on the gallery’s Board of Trustees, he remained vital to its operation and continued to influence the acquisition of new works. He died in 1888 at the age of 89.

As his collection expanded, William Corcoran began to open his home to visitors twice a week to allow them to view it. This practice soon led him to formulate plans for a public building to house and display the collection. In 1859, he commissioned James Renwick to design a gallery at the corner of Pennsylvania Avenue and 17th Street (now the Smithsonian Institution’s Renwick Gallery). His plans were changed, though, by the outbreak of the Civil War. Corcoran, a southern sympathizer, retired to Europe to wait out the war, and in his absence the federal government seized the still-unfinished building. Only after the war was the gallery returned to its owner and completed.

On May 10, 1869, Corcoran deeded the building, grounds and a private collection valued at $100,000 to the nine members of a self-perpetuating Board of Trustees. The following year, the institution was chartered and exempted from taxes by an Act of Congress. The Corcoran Gallery of Art formally opened its doors on January 19, 1874 with an exhibition of 98 paintings and sculptures. By the end of the year, the collection had expanded to more than 300 works.

Corcoran instructed his Trustees to open the gallery free to the public twice a week. The remaining days they were to charge “moderate and reasonable fees for admission,” in keeping with the cost of maintaining the building and collection. Senator H.S. Foote commented in 1873, “If all the great capitalists that our country contains could be persuaded to imitate his noble example, our republic would so become paradise.” 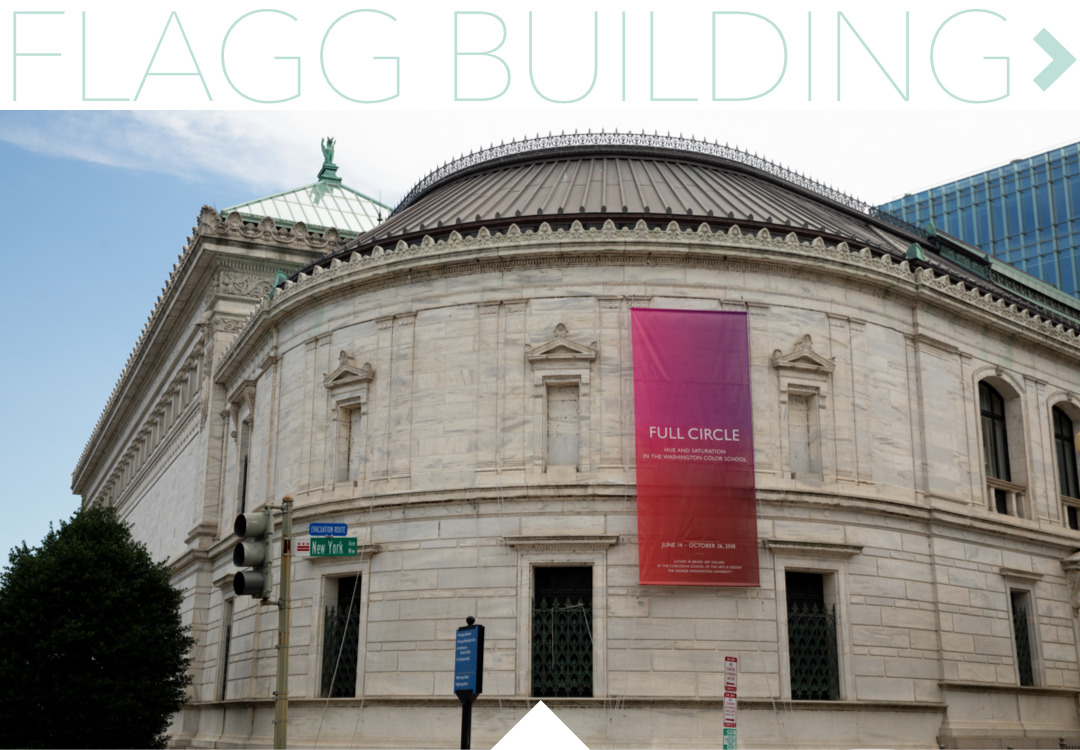 An integral part of the Corcoran’s history, the Flagg Building was designed by Ernest Flagg, a noted American architect, in the Beaux-Arts style. The building opened in 1897 and now houses many of the programs that make up the Corcoran School of the Arts and Design.

The building received D.C. historic landmark status in 1964 and was listed in the National Register of Historic Places in 1971. The D.C. Historic Preservation Review Board designated most of the building’s interior historic in 2015.

This historic building first opened in 1897 as the expanded home for the Corcoran Gallery of Art. Designed by noted American architect Ernest Flagg in the Beaux-Arts style, the building’s design includes a separate entrance on New York Avenue for students entering the newly established Corcoran School of the Arts & Design, which was housed in the basement. The Gallery, then one of the few major collections in Washington, D.C., grew significantly in 1926 with the acquisition of Senator W.A. Clark’s collection of European and American art, and a large new wing was added to the rear of the building.

Completed in 1928, the Clark Wing, as it's known today, expanded the Corcoran’s display and storage space dramatically while also adding key building features such as the Salon Doré and Rotunda. The entire building was designated as a National Historic Landmark in 1992, with many interior spaces receiving historic preservation status in 2015.

After the Corcoran joined the George Washington University in 2014, an assessment of deferred maintenance and needed upgrades placed the total estimated cost of renovations at $80 million. Priority was given to fire egress, ADA access, site utilities, and mechanical, electrical, and plumbing upgrades.

Now known informally as the “Flagg Building"—so as to be inclusive of a broader Corcoran School that includes studio arts, art history, dance, design, theatre, music and museum studies programs across the Foggy Bottom campus—this celebrated building is undergoing a multiyear, phased renovation project. The building remains open as an academic building during renovations.

Phase I Renovations were completed in 2018. With a $47.5 million investment, we’ve made  critical infrastructure upgrades, added a multistory, open-air platform to the central courtyard area, made improvements for accessibility features, converted spaces for teaching and made improvements to studios.

The Salon Doré is the Corcoran’s 18th-century French period room. It was originally part of the hôtel de Clermont, an important early 18th-century private residence in the Faubourg Saint-Germain, an old aristocratic quarter of Paris. After purchasing the house in 1768, Pierre-Gaspard-Marie Grimod, Count d’Orsay, commissioned the Salon Doré as the drawing room for his bride, Marie-Louise-Albertine-Amélie, Princess de Croÿ-Molenbais; it was completed just in time for their marriage in December 1770.

In 1926, the room’s gilded wall paneling and ceiling mural came to the Corcoran as part of the bequest of William A. Clark (1839-1925), an industrialist and United States Senator from Montana. Senator Clark purchased the room around 1904 for installation in the mansion he was building on Fifth Avenue at 77th Street in New York City. The Salon Doré as it is today is the product of these two great patrons of the arts, the French Count d-Orsay and the Francophile Senator Clark.

To read more about the history of Salon Doré, see the Washington Post.

Stephen Wyman, ESIA BA '85, and the GW University Archivist, Brigette Kamsler, chat about the history and connections between the George Washington University (originally Columbian College) and the Corcoran Gallery of Art, now the GW Corcoran School of the Arts & Design.