Jordan Amirkhani, MA ’10, accepted a position as professorial lecturer in modern and contemporary art history in the Department of Art at American University in Washington, D.C.

Linda Harris, BA ’74, will become a professional member of the National Association of Professional Organizers (NAPO) this May. After completing NAPO's three introductory courses, Linda’s name will be put into NAPO's national database of office & residential organizers.

Bryan Hilley, MA ’15, presented the paper Here Today, Gone Tomorrow: Visibility in the Performances of Chris Burden at the 2018 SECAC Annual Conference. His review of the artist Cassils will appear in the Spring 2019 issue of Women & Language.

Sonja Lunde, BA ’99, is an experienced arts administrator and museum professional as deputy director at the Utah Museum of Fine Arts (UMFA) in Salt Lake City. She is skilled in providing leadership and strategic vision in support of the UMFA's mission.

Cindy Beblavy, BFA ’85, and her borzoi have been living in Ecuador. Malecon de Salinas is beautiful and tranquil.

Dana Ellyn, BA ’92, is an artist whose work is collected and exhibited worldwide including in the: American Visionary Art Museum in Baltimore, MD (2017) and the Museum of Contemporary Art in St. Petersburg, Russia (2019). Her 'Collaborators' exhibit opened on March 13 at the Hill Center in Washington, D.C. and runs through April 28.

Ingrid Keune, BA ’73, is a professional traditional 19th-century Scandinavian folk artist. She teaches and lectures about Norwegian and Swedish rosemaling at museums and folk schools, and accepts commissions and students at her studio in Arlington, VA.

Leila Taghinia-Milani Heller, MA ’79, just opened a new gallery space on the Upper East Side of New York City at 17 East 76th Street off of Madison Avenue in N.Y.C.

William Landsman, MFA ’14, is the head of Eclectic Bison Productions PTE LTD in Singapore. The company produces Improvanopolis, an improv show, and other theatre and training work, as well as executive coaching for personal and corporate clients.

Farrell Parker, MFA ’17, was nominated for a Helen Hayes Award for Outstanding Supporting Actress in a Musical for Fly by Night at 1st Stage. She also received a 2019 Arts and Humanities Fellowship grant from the D.C. Commission on the Arts and Humanities.

Leslie Jones, MA ’11, was recently appointed director of museum affairs and chief curator for The Preservation Society of Newport County in Rhode Island. She will oversee eleven historic properties, the 55,000-piece collection, exhibitions, research and programming.

Elisa Wadsworth, MA ’10, is passionate about giving back to the community in which she grew up. She shares her knowledge of art and design history with the next generation of budding artists as a fine arts and ceramics instructor for Charlotte Mecklenburg Schools.

Esther Van Eek, MFA ’06, is an associate professor in the School of Dramatic Art at the University of Windsor. She was recently recognized with a national teaching award and maintains an active design practice in Canada and the US.

Candice Cain, BA ’98, has her new series New Dogs, Old Tricks, based on her GW experience, on Prime Video. It is currently in contention for the Daytime Emmy Awards.

Natale Clark, MA ’14, worked at Social Tables for two years after graduation. She moved to Durham, N.C. at the end of 2016 and is now director of operations for Hi Fidelity Genetics, a computational plant breeding company. She married Elliot Blumberg, MA ’14, of New Media Photojournalism in October 2018.

Vasia Deliyianni, MFA ’93, was selected to be among 103 international artists in the book Can Art Aid in Resolving Conflicts by N. Latar , J. Wind and O. Lev-er. Now she is curating an exhibit based on the book’s theme in Athens, Greece, opening in July.

Mary LaRoche, MFA ’13, is gainfully employed as the exhibit designer for the Mid-America Arts Alliance, NEH on the Road, and ExhibitsUSA programs. Her traveling exhibitions can be viewed in all 50 states!

Ariel Wilchek, MA ’12, is creative director for On Board Experiential, where she manages a diverse design team and strategically leads projects for Fortune 500 brands such as Facebook, Nike, and Apple. Life is good!

David Allison, MFA ’82, had an image included in the recent exhibition, LEGACY - William Woodward and Students 1977 - 2005 at The Arts Club of Washington DC, Curated by Lenore Miller. David is represented by the Atlantic Gallery, NYC  - www.atlanticgallery.org

Jenn Jenson, AFA ’17, is a proud member of the new docent class at the National Gallery of Art. When possible, she plans to feature old friends from the Corcoran collection in her tours.

Lewis Keper, BA ’76, has been designated as an official Tamron Pro ambassador. Tamron will be sponsoring him at a variety of speaking engagements throughout the United States.

Judy Bass, MFA ’74, taught fine art classes and served as director of the art gallery at Marymount for 32 years until her retirement in 2016. She is having a solo exhibition at the Fred Schnider Art Gallery in Arlington, VA from March 15 through April 22.

Nakeya Brown, MFA ’13, is a 2017 Snider Prize award winner who uses photography to explore the complexities of race, beauty politics and gender. One of her pieces was featured on season one of the HBO series “Insecure,” produced by Issa Rae.

Meredith Janssen, BFA ’71, is a signature member of the Watercolor Society of North Carolina. She currently has work on display with the Western Region Exhibition at Caldwell Arts Council in Lenoir, N.C.

Claudia Lamy, BFA ’18, is excited to move forward creating intersections of business, fine art and exchanges of self, others, cultural functioning, and economical services. As an artist and creative consultant for Art Serve, in 2019 Claudia will focus on augmented reality and sound design.

Aselin Lands, BFA 12, MA ’13, is the director of ArtReach GW and The Community Galley at THEARC.

Barry Mason, BFA ’82, continues to exhibit his majestic, lyrical, abstract-shaped paintings throughout the New York metro area and beyond. In 1981, his senior year at the Corcoran, he began creating the odd-shaped paintings that have become the signature style he is known for.

Ned Bittinger, MFA ’82, has been making a living primarily as a portrait painter since graduating. Bittinger had two oil portraits hanging in the US Capitol, two portraits of Secretaries of State, two of Secretaries of Energy, and two Chiefs of Staff of the Army in the Pentagon, among many others.

Vian Shamounki, BA ’96, is proud to be featured in iCanvas feature in support of the National Museum of Women in the Arts #5WomenArtists Campaign amongst other talents contemporary women artists of our time. 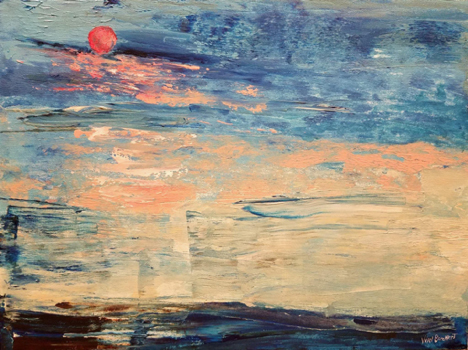 Sitki Kazanci, AFA ’09, is an accomplished graphic designer and owns his own company. He has a graphic design agency in Tysons Corner, Virginia called Creative Edge Design Studio.

Jonathan Webb, BFA ’96, has had many jobs since graduation, with titles including junior designer, art director, and creative director.  In 1998, he started his own advertising agency, building it into a 100-person firm. He now owns the largest health and beauty e-commerce website in the USA.

Heidi Stearns, BA ’82, graduated from Mount Vernon. She has been living in Sun Valley, Idaho, working as an interior designer for thirty-seven years.

Nino Tabeshadze, CERT ’12, completed her PhD studies in her home country, Georgia, and now works as a university professor. She participates in international conferences and is a very successful scholar. GW played a huge role in her success!

Michelle (Craig) McDonald, MA ’94, worked in museums for 10 years after graduating from GW, later completing a Ph.D. and teaching history. She moved into university administration four years ago, and is now associate vice president of academic affairs at Stockton University.

Matthew Sanders, MA ’17, is currently a researcher and exhibit developer under contract with NASM and the Historical Society of Washington, D.C. In November, he saw both the book he helped produce see publication, and proposed to his now-fiancée, Meaghan.

Kimberly Sissons, MA ’10, Kim has been working hard as the collection manager at the Krannert Art Museum at the University of Illinois Urbana-Champaign to get more than 80% of their collection of over 10,000 artworks online.

Thomas Michael Corcoran, BFA ’06, has been working for the Pennsylvania Department of Corrections, and recently foiled a bank robbery. He has been awarded the Corrections USA Medal of Valor, and by the state PA DOC Medal of Valor.

Sana Ullah, MA in New Media Photojournalism ’17, won the 2019 Goldziher Prize for Journalists for Places You’ll Pray, a collection of vibrant images of young American Muslims praying in public spaces outside of a mosque. The series was created by Ms. Ullah as a student at George Washington University, and these photos have since been published in Huffington Post, Fusion, Quartz and other outlets.

Yael Dresdner, BFA ’83, has her pastel-on-paper piece, Nude in Pillow, as part of the art exhibit Complicit: Erasure of the Body. Organized by Nasty Women of CT, the show runs from March 3 through April 12 at the beautiful Yale Divinity School.

Firooz Zahedi, BFA ’76, has had two books published over the past three years. The first was My Elizabeth, published by Glitterati Incorporated, a book of photographs and short stories about his friendship with Elizabeth Taylor, whom he met in Washington, D.C., in 1976. The two remained good friends until Taylor’s death in 2011. His second book, City of Angels, was published in October 2018 by Vendome Press, a large photographic book on twenty-eight great architectural and stylish homes in Los Angeles. He is presently working on a book of his forty years of portrait photography. Further details are available on his website: www.firoozzahedi.com