Gift Guide: Alumni’s recently written and illustrated books may be the perfect stocking stuffer, many for the young and young at heart 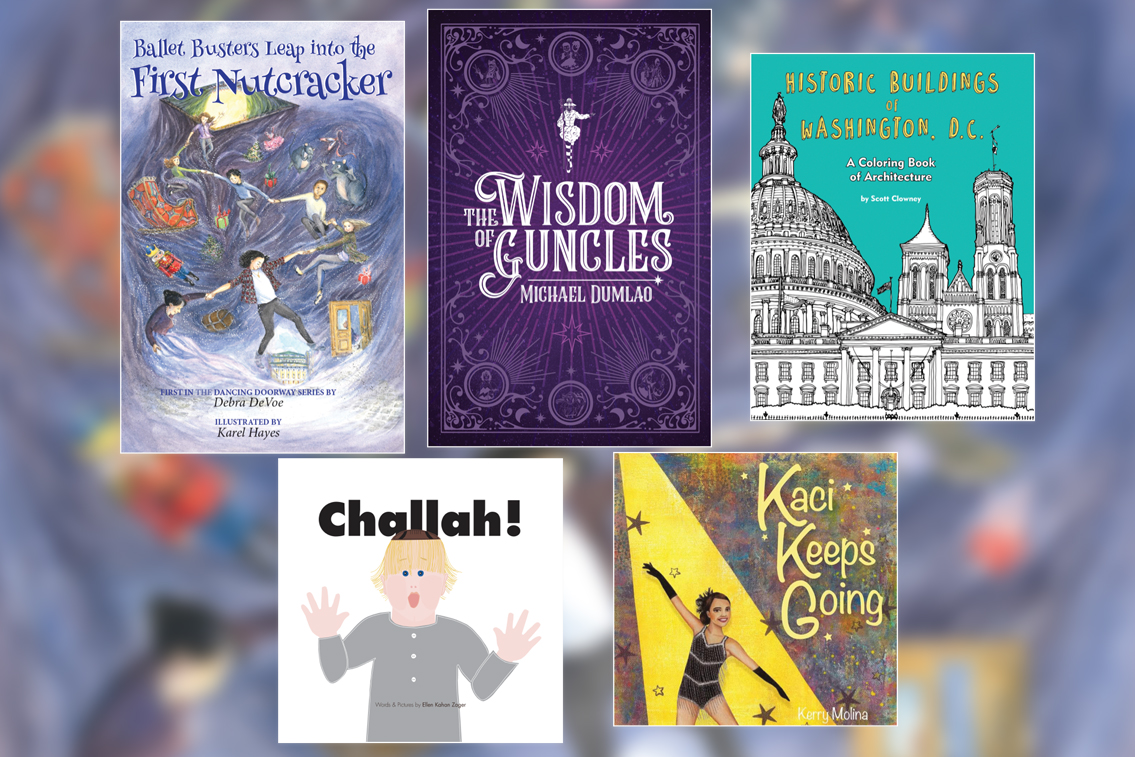 Like the alumni featured in this year’s gift guide, these five authors also took a few left turns, be it returning to a forgotten story from their past or switching media altogether.

Debra Ann DeVoe, Dance Education M.A. '82, loves to dance. She took her first class at 3 years old, began helping her teacher lead other dancers at 13, and by her senior year of high school was teaching her own class of preballet students. In her spare time, she devoured books about ballerinas, dance history and ballet stories. When she went off to college, she continued the obsession.

“Working with Maida Withers and Nancy Johnson during the early ’80s at GW, I expanded my knowledge of dance beyond technique,” says DeVoe, currently a dance teacher based in Maryland. “I delved into dance philosophy, criticism, dance history and research.”

It was only natural then that in 2018 she penned her own children’s book, “Ballet Busters Leap Into the First Nutcracker.”

The story follows Marti, Julie, Zack, Luis and their dance teacher, Miss Sophia, as they travel to St. Petersburg, Russia, in 1892, to witness the first staging of “The Nutcracker.” DeVoe says she noticed a lot of dance picture books on the shelves, but not many chapter books for grade school students. So she wrote her own, creating fictional characters but taking some inspiration from her own life.

During an improv dance course with Withers, for instance, her class was walking past the Kennedy Center and saw famed choreographer George Balanchine standing outside.

“[Withers] went up to him, shook his hand and introduced all of us, thanked him for his work, and he signed the sole of her dance shoe,” she says. “Balanchine had performed as a child in one of the early Nutcracker performances in Russia. In my books, the children leap back in time and work with famous dancers from long ago. Maida taught me you can meet and learn from great people in the world of dance.”

It was while singing together in the Gay Men’s Chorus of Washington, D.C., that author Michael Dumlao and artist Kyle Bryant, Fine Arts B.F.A. '18, struck up a friendship—both personal and professional. Dumlao, who had just penned a book of queer insights, was searching for an illustrator and had seen Bryant posting his work on social media. Though Bryant had never illustrated a published book before, his style was exactly what Dumlao was looking for.

“I think it was also important to him to work with a queer artist of color,” Bryant says, “as the book tells the true stories of a diverse group of LGBTQ+ people.”

“The Wisdom of Guncles” shares 10 journeys from a collection of gay uncles (“guncles”) and other queer guides, told through varying archetypes—the Nerd, the Skeptic, the Elder, among others. With input from Dumlao, Bryant illustrated each of the narrators at the start of the chapter. The Alchemist, for instance, tells the story of a queer, non-binary drag artist from Paraguay struggling with their immigrant parents’ expectations. Eventually, they create the safe space they never had and give their niece the confidence to come out. Bryant illustrates them sitting assuredly in a salon chair, robe overflowing, with a fading transmutation circle in the background.

Bryant says that, while he doesn’t have a guncle nor is he a guncle himself, the stories in the book were so universal—”triumph after tragedy, risk and reward, selflessness and sacrifice and duty to your family”—that he was able to relate to something in each chapter.

“I actually cried like a baby while I read it,” he says.

The Wisdom of Guncles
by Michael Dumlao,
illustrated by Kyle Marcus Bryant
$14.99
thewisdomofguncles.com

There’s no pressure like the pressure we put on ourselves, and Kerry Molina, Museum Studies M.A. ’96, knows that all too well. As a teenager, Molina (née Christiano) had prepared all summer for her upcoming live dance performance during the Miss New York State pageant. She was the youngest contestant, from a very small town, but she’d secured a spot in the top 10.

Once she was on stage, though, as she began to make her way through the routine, the lights and the eyes of the audience began to throw her off her game. Suddenly, she forgot the steps. But Molina persevered, making her way through the performance despite the falter, and eventually was named fourth runner-up.

Years later, she retold the story in a personal essay class in college and knew she wanted to turn it into a children’s book. In 2018, she penned “Kaci Keeps Going,” about a young dancer named Kaci (K.C., for Kerry Christiano) who works hard not to let her nerves get the better of her during a solo dance performance.

“The messages of perseverance, hard work and a growth mindset are so important to impart to kids,” she says.

Fill in the Blanks

Browse the website of artist Scott Clowney, Exhibition Design M.A. ’11, and you’ll see a somewhat disparate collection of his work: illustrations titled “Skulls” and “Death in the Evening” mix with line drawings of beautiful buildings, from Hampshire House in Boston to Carnegie Library in Washington, D.C. But a person contains multitudes, and, as an artist, he goes where the inspiration—or the lack of it—leads him.

“After the coloring book series, I struggled to draw—even doodle,” Clowney says. “This ‘artist’s block’ had a negative impact on my mental health and well-being, and I slipped into a period of sustained, self-sabotaging doubt. One day I just decided to tap into all that uneasiness. I sifted through my archives and began creating new work around themes of light and dark, but mostly darkness.”

Clowney says he’s more productive these days than he ever has been, but architecture is his true love. Currently the director of exhibitions and public programs at the District Architecture Center, Clowney says he’s long had a passion for striking spaces that shape a city skyline. In 2017, he teamed up with the National Building Museum to create “Historic Buildings of Washington, D.C.: A Coloring Book of Architecture,” celebrating the form of the White House, Union Station and other architectural landmarks.

“My hope was [those who buy the coloring books] would be enticed by the challenge or proposition to stay within the lines or break free from the extreme constraints, whatever their fancy,” Clowney says.

He’s added three more books to the collection in the years since (including one set to release in 2023, featuring San Francisco), each hand-drawn building accompanied by a paragraph on the history of the structure, inviting the viewer to add her stamp with colored pencils, markers or pens—and, of course, her own unique viewpoint.

Kids say the darndest things. For Ellen Kahan Zager’s grandson, the word was “challah.” It was his first word, and until he knew what other carbohydrates were called, he described each of them indiscriminately as challah, the traditional Jewish braided bread.

The hilarious mix up prompted Zager, B.A. '73, an art director by trade, to write “Challah!,” about a little boy named Elior who counts the days to Shabbat, when he can indulge in challah once again. Along the way, he encounters things that are not, in fact, challah—pancakes, a chocolate cake, a croissant—until finally his beloved challah appears.

This wasn’t Zager’s first book—she co-wrote and illustrated “And There Was Evening, And There Was Morning,” which tells the story of how God created the world—but it was the first she wrote for her grandson.