From the National Mall outward, Washington, D.C., can feel like a 68-square-mile museum, packed with stone and metal tributes to towering figures in history and the allegorical ideals they represent. But for artist, historian and curator Paul Farber, this year’s William Wilson Corcoran Visiting Professor of Community Engagement at the George Washington University Corcoran School of the Arts and Design, it’s equally important to look at the things and people absent from the monumental stage.

“History lives—not just as something that so-called history buffs reenact, or that we keep behind museum glass, but as a living force that artists help us interpret and that guides the way we think about our current moment,” said Dr. Farber, director and cofounder of nonprofit public art and history organization Monument Lab. “And I’m particularly interested in the way that history lives in public spaces.”

Dr. Farber said American monuments exist in part “to create a usable past” for this relatively young country—to tell an easier story than America’s inconvenient, often contradictory history. “Monuments elevate figures and stories without the deeper work of reckoning with the past,” he said. “I think in order to move forward, we have to have a new relationship with our past, to face it directly in order to foster healing and repair.”

In Washington, D.C., where Dr. Farber lived as a doctoral student, he saw firsthand how what we choose to commemorate illustrates what we find socially useful—and obscures historical truths we find dangerous or subversive. While writing his dissertation on American artists and the Berlin Wall, for instance, Dr. Farber found himself encountering pieces of his subject all over the city. The environments in which these fragments were placed implied veneration and historic significance: a fist-sized chunk at the Smithsonian Museum of American History, a graffiti-covered replica at the International Spy Museum.

What Dr. Farber didn’t find in museums was the history of Washington, D.C., as a living city. The 1968 civil unrest after the assassination of Martin Luther King Jr., for instance, lived vividly in the memories of D.C. artists and writers Dr. Farber spoke to. But Dr. Farber could find just one officially sanctioned site of memory acknowledging those four days of turmoil: a small historical placard near U St., NW.  These events were “living in the consciousness of the city” but were not given the official imprimatur of monumental objects, despite the ongoing “heavy burden of history and healing” they represented in residents’ memories, Dr. Farber said. Meanwhile, the Berlin Wall seemed to be everywhere.

That was understandable, given the wall’s narrative significance as a symbol of communist repression and the District’s symbolic position as a stand-in for Western democracy. (One section of the wall, now standing in a courtyard outside the Johns Hopkins University School of Advanced International Studies, is commemorated in a plaque as “a reminder that freedom can never be taken for granted.”) But the number of concrete fragments from a distant European city was also telling in contrast the absence of public memory spaces dedicated to the on-the-ground history of D.C. itself.

“If these ‘monumental’ pieces of history are installed across the nation's capital, not to mention other places across the country that I was encountering on research trips, what are the histories not being represented in those places?” Dr. Farber said. “It brought home to me that monuments are about representing and drawing attention to significant moments in our history, but also they were vantage points to assess these huge gaps and occlusions.”

More recently, Dr. Farber saw these gaps as co-director of the National Monument Audit, conducted by Monument Lab in partnership with the Andrew W. Mellon Foundation. Since there is no nationwide agency overseeing the creation and maintenance of historic monuments, the audit’s research team scoured thousands of registers from federal, state, local, tribal, institutional and public sources, focusing its most in-depth investigations on a study set of about 50,000 “conventional monuments” from across the United States.

The audit’s results reflect America’s systemic inequities, Dr. Farber said. Of the top 50 most memorialized historical figures, just three are women (Joan of Arc, Sacagawea and Harriet Tubman) and three are Black or indigenous men (Dr. King, Frederick Douglass and Tecumseh). None of the top 50 are openly LGBTQ+. Of monuments in the study set, there are more than 10 times as many depictions of mermaids (22) than of congresswomen (two). And despite heightened conversation around demands to remove statues of controversial or offensive figures, the audit found that such removals represent only 0.6 percent of the country’s existing monuments.

The report has already had an impact on policymakers. Pennsylvania State Rep. Chris Rabb (D) cited it in a recent proposed bill replacing the Columbus Day state holiday with one for Election Day.

Dr. Farber said the bill is an example of the ways that meaningful systemic change is linked to, but not identical with, changing what we see on public pedestals.

“Statues are highly visible and important places of organizing, and they’re also indications of existing systems that have to be addressed,” he said.

Dr. Farber’s students are colleagues and collaborators in the quest for understanding. His current class, “What Is a Monument?” has both graduate and undergraduate members from across a range of disciplines, and their fieldwork doesn’t stop at the doors of the classroom. They’ve held sessions on the National Mall and other local sites, and Dr. Farber said the opportunity to bring the class into the city—“not just to point off into the distance, but actually proceed out of the building”—is an opportunity he treasures.

“It’s a real full-circle moment for me,” he said. 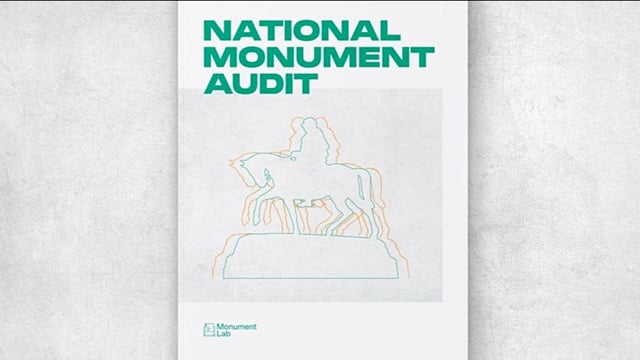