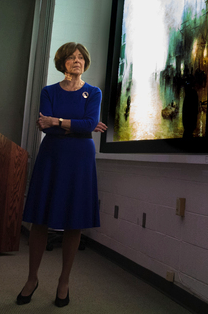 Born in Slovenia, raised in Serbia and briefly in Switzerland, Professor Robinson's early education was in Serbian and French schools, and thereafter in Washington DC primary and secondary schools. While she had previously had instruction in painting and a strong interest in its history, after an extraordinary and intellectually riveting first lecture in her Art History survey course she was fully committed to its study and to a teaching career. The lecturer was both a formidable teacher and exeptional scholar; Dr. Laurence Leite inspired, encouraged, and guided her in her studies at George Washington. He inevitably conveyed his own wonder and excitement that human creativity elicits - every lecture was a revelation. For Professor Robinson, this mentor remains unsurpassed as a teacher, a model she continues to reflect upon and emulate.

Journal Articles on various aspects of Serbian Painting, published in Serbian Studies, include:

Papers and Lectures at:

At The George Washington University: