Flowers as the Medium for Protest and Change 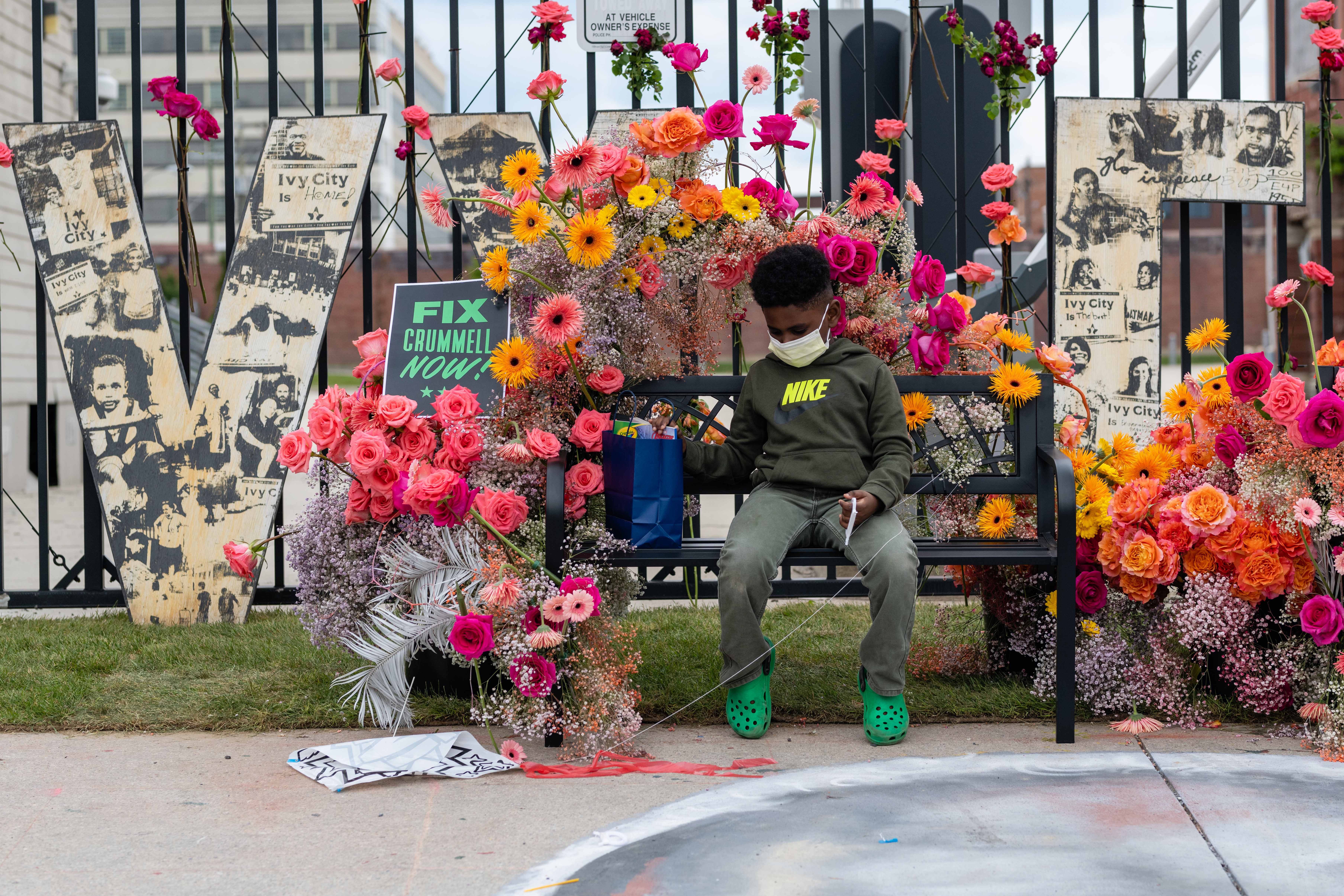 A child sits amongst the flowers in the Floralscapes installation. Photo taken by Eric Lee

A first-generation American artist — and Corcoran graduate student — created a botanical project in May 2021 to protest gentrification and displacement in Ivy City, a historically Black neighborhood in Washington, D.C. Later that month, Mayor Bower announced $20 million in funding to restore a community center in Ward 5.

When Adele Kenworthy (Social Practice ‘22) first heard about Ivy City, a small neighborhood in northeast D.C., she was struck by its history.

“The Ivy City subdivision was envisioned as a bucolic community for Black people to lay down roots following Emancipation. But for more than a century, cycles of industrial development and government disinvestment have thwarted the original promise of Ivy City,” Adele writes on her website.

Kenworthy was struck by the need for green space in the community, and she couldn’t get an idea out of her mind: What if a pop-up green space could be used to peacefully protest for change? As she applied to graduate school at the Corcoran — studying Social Practice, a form of art that partners as community engagement — a germ of an idea called “Floralscapes” emerged in her mind. “The heart of this botanical protest art series is to reimagine what radical community care can look like post-COVID-19 and how joy and desire can be acts of defiance… an example of what can happen when artists, activists, and community organizers get together,” she said.

In Ivy City, children lacked safe places to play and congregate; playgrounds and ballfields are lacking as new restaurants and housing developments are increasing. New housing was opposed by activists and residents of the neighborhood, as they knew it would put economic pressure on the current residents.

"This is a neighborhood without any parks, without any trees,” says Parisa Nourouzi, of Empower DC, on Kenworthy’s website. “It does have a roastery, breweries, distilleries, ax-throwing, a day-drinking spot for parents, traditional retail, and some unique, historic architecture, but some trees wouldn't hurt.”

Kenworthy envisioned the site of the floral installment to be the Alexander Crummell School. Open from 1911 to 1972, the landmark was named for a Black minister over a hundred years ago. For the past 30 years, the building has sat vacant in the community, no longer serving the good to its community it once did.

“I firmly believe access to green public spaces is a basic human right,” says Kenworthy. “Ivy City in Ward 5 is identified as an urban heat island and in the summer it is one of the hottest parts of the city. Rising temperatures and lack of tree cover directly impact health and well-being.” (For more, she points to an NPR article on the topic of redlining and its effects on cities.)

“Years of environmental injustices rooted in racist housing practices, such as redlining, has contributed to a 40-year-long fight for a public green space by Ivy City residents.”

The installment was an array of color, flowers of all different hues put together into one piece of art.

Called Floralscapes, it was designed to protest the lack of green space via a multi-site public botanical project. Kenworthy created the piece in the form of murals and structures of flowers and plants to express simultaneous beauty, power, and community.

The floral installation included over 3,000 flowers and over 1,300 square feet of sod. “The idea of Floralscapes came during the time I lived in Baltimore, Maryland,” Kenworthy says. “Baltimore city records list approximately 16,000 vacant buildings, however, Baltimore Neighborhood Indicators Alliance estimated in 2015 — based on numbers from both the city and Federal Census Bureau — there were actually 31,370 vacant buildings. Floralscapes sprouted from my love for Charm City and it is a dream of mine to do an installation there in the near future.”

Speaking on this particular branch of the project, Kenworthy says “Let Ivy City Bloom came from when I reached out to Executive Director of Empower DC Parisa Norouzi about collaborating on a public art installation that would amplify their efforts on restoring the Crummell School. As we had an ongoing dialogue around what community power and community care means to the people of Ivy City, the idea of a pop-up park emerged and became the heart of Let Ivy City Bloom’s peaceful protest.”

On Floralscapes’ effect, Adele says, “By centering art as the catalyst, we were able to reroot the dialogue to challenge the status quo on how cities might approach development — why certain communities are allowed to experience blight while others don’t; advocating for more democratic forms of community transformation; and what it means to listen when a community expresses what development means to them.”

The installment went up in mid-May, and it was announced later that month that Mayor Bowser will spend $20 million to restore The Crummell School into a community center for Ivy City. Children will now have access to a safe space to play and grow.

Upon learning of the funds pledged to the neighborhood, Kenworthy was moved. “My diasporic first-generation American experience is layered by a lineage of uprooted legacies in my family. I am a native to nowhere. My sense of belonging was never rooted in a particular location, but in community and fellowship with others — home for me is the people I get to fall in love with,” she says. “My heart overflows for the people in Ivy City and the victory belongs to the generations of their community that refused to believe they deserved anything less.”

Adele Kenworthy (Social Practice ‘22) is more than just an artist; she is a healer. She uses her talent and skill to create positive change in a time where we feel it will never come. She uses her creativity and artwork to illustrate the value of community. The floral medium represents a power in beauty and a beauty in power.

“Flowers are the medium for this project not only because they are what I remember most from happy moments of my childhood,” says Kenworthy, “but also because they are a microcosm for what happens to people and communities when natural paths of connection are severed through the inequitable design of the built environment.”

Floralscapes’ first installment was called “Let Ivy City Grow,” the first catalyst for change in the project that rejects gentrification and displacement.

Adele Kenworthy studies Social Practice at the graduate level at the Corcoran, a program for creative thinkers who want to combine art, policy, and collective action.

“I would not have had as nearly a fulfilling and generative experience without the care web of support and accountability from GW faculty and especially my Social Practice MFA cohort. We are fortunate as artists to consider failure as part of our process, and building failure into our practice is the work. When I dive into new projects, I find reminding myself of that profoundly freeing.”

This beautiful project has made an immense impact on the Ivy City community, one the city has neglected over the years: a community came together to protest these wrongdoings and bring safety to their neighborhood. The Crummell School restoration in Ivy City will be completed by 2024, and from then on, kids growing up in the neighborhood will have a place to also come together.

“My community partner, Empower DC, is an exemplary embodiment of what it means to speak truth to power, and I am grateful to its Executive Director Parisa Norouzi and ANC Commissioner Sebrena Rhodes for also believing art can power movements,” says Kenworthy. “The real Ivy City’s historical resilience carries a legacy of unparalleled community care that spans generations. Floralscapes’ contribution was just a reflection of what already exists in abundance.”

GW also supported the project through the Honey W. Nashman Center for Civic Engagement and Public Service. Jordana Rubenstein-Edberg, another artist in the Corcoran Social Practice cohort, is a graduate assistant at the Nashman Center and a documentarian/photographer; she played a major role in the documentation and planning of the event. She put together a video of the event to watch.

“The humbling lesson for me is knowing the fight will never be over, but if we can choose to care for one another along the way, that’s where I want to lay roots,” Kenworthy said. “I recently read this quote that resonates so clearly what I strive for in my art practice: ‘my love language is reminding you of your power.’”

Adele shared the poem, “From Blossoms,” by Li-Young Lee, as a piece that illustrates this beautiful neighborhood and its achievement.