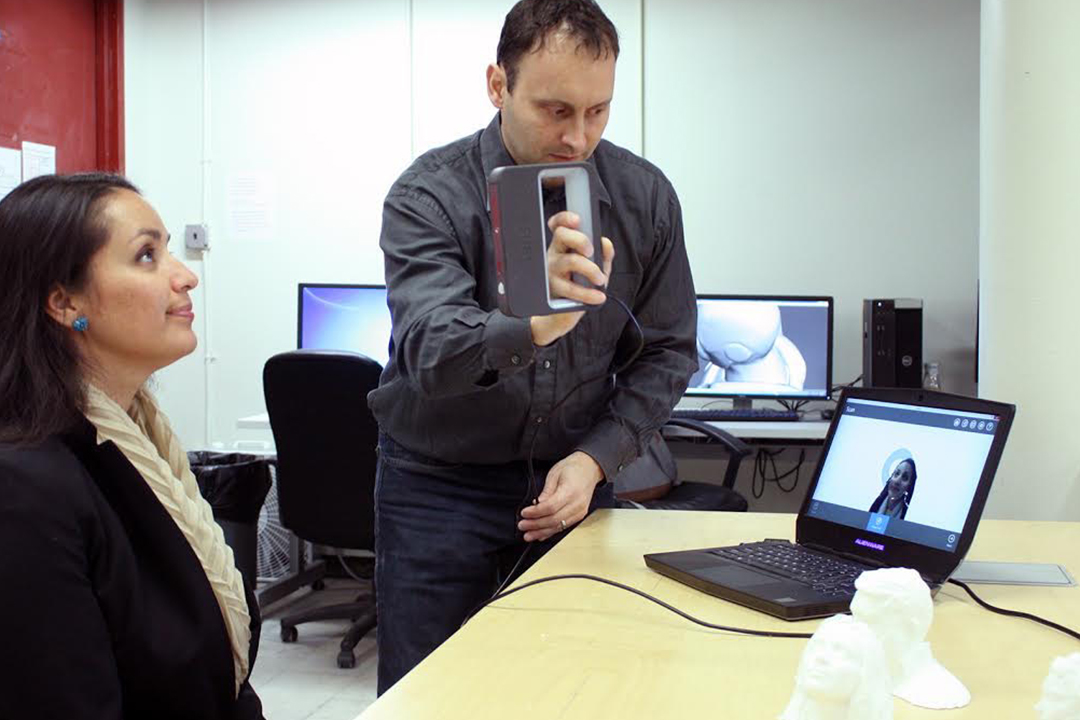 “Artists in the future may work with a surgeon in order to 3D model an organ from an X-ray,” says Prete, who incorporates 3D printing, modeling and scanning into his class “Sculpture and New Technologies.”

The class, which was recently profiled by global printing solution provider 3D Systems, allows students to experiment with 3D imaging tools and software while at the same time building on more traditional skills. Prete says he wanted to blend both traditional and new techniques because of how each method informs the other.

"If you’ve never worked with your hands and modeled with clay, it’s really tough to understand how clay modeling software works and the different tools that you can use,” he says.

While the initial idea for the class was to work with a lot of hardware, Prete and his students ended up focusing more on software. “The only hardware that we are using is a simple 3D scanner—an optic scanner that uses a 3D sensor to acquire the shape of whatever we’re scanning,” Prete says.

Students are able to scan objects, and even themselves, using the small device. Then, with free software, they can sculpt and digitally experiment with the images on their computers.

One project asks students to reinterpret a scanned image of their face and connect it to a social issue such as climate change, discrimination or gun control. As part of another assignment, Corcoran student Victoria Meyers created a representation of her personal brand by adding filagre to a scanned bust of herself.

“I really love filagre with a floral feel,” Meyers told 3D Systems. “I use it in my personal logo, and it is tattooed on my right shoulder. This tile is a representation of that.”

Several of Prete’s students have taken what they’ve learned in the class and translated it into careers. “We are developing skills that can be easily transferred to other industries,” says Prete, who recently ran into one former student at the National Maker Faire in D.C.

“He was presenting a big 3D-printed part for a wind turbine,” Prete says of his former student who is currently working with the government to develop new 3D-modeling software. “He found a way to print it in carbon fiber so it’s more resistant to stress coming from different directions.”

An architect and sculptor who started his career as a jewelry designer, Prete incorporates 3D technology into his own art as well. He recently took advantage of the National Institute of Health’s 3D Print Exchange to create a series of pendants made out of 3D printings of chemical structures, for example.

“I produced an endorphin structure to make jewelry,” he says. “You download the endorphin chemical structure, extrude it, make it solid, and then you can 3D print it.”

Prete’s also incorporating 3D printing into a more personal project. After becoming a U.S. citizen last winter, Prete decided to create a 4-foot-by-8-foot American flag made up of almost 5,000 small 3D busts produced via scans of people he meets around D.C. “It’s going to be a sort of mosaic of thousands of people,” says Prete, who spends much of the time he’s not in the classroom traveling around the city with his hand-held scanning device. “It’s about community.”

For more on Prete’s class “Sculpture and New Technologies,” which will run in Spring 2017, check out this article from 3D Systems. Prete will be teaching “Metals and Metalsmithing” this fall.