A Communal Search for Answers in a Challenging World 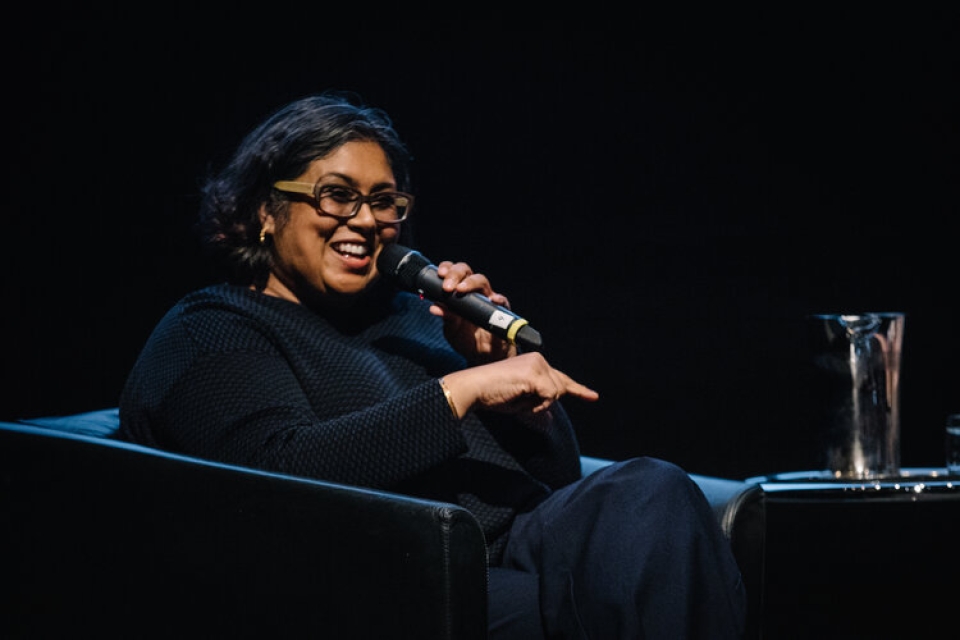 "I often turn to art and to cultural practice for guidance on how one can move forward," said Aruna D'Souza. (Photo by Connie Tsang)

This year, the William Wilson Corcoran Visiting Professor of Community Engagement will be Aruna D’Souza, an art critic and writer whose book, Whitewalling: Art, Race and Protest in 3 Acts, was widely hailed as one of the best art books of 2018. She will be teaching in the Corcoran School of the Arts and Design, housed in GW’s Columbian College of Arts and Sciences.

Her book grew out of the controversy that erupted after the 2017 Whitney Biennial included Open Casket, a painting by Dana Schutz, a successful white woman artist, of Emmett Till in his coffin. The painting is based on historical photographs of Till, a 14-year-old boy who was murdered after being accused of flirting with a white woman. In the wake of its exhibition at the Whitney, a public debate was held about the implications and appropriateness of the work.

“The Black body in pain or in death is often treated as an aesthetic object in white supremacist culture,” D’Souza said, “or is treated as just part of the spectacle of culture, rather than understood as representing the pain of an individual, a community or a country.”

When Black artists and critics protested the inclusion of Open Casket in the Whitney Biennial, a counterprotest was waged by people who claimed that those objecting to the inclusion of the painting were trying to censor the artist. The debate raised issues that spilled over from the art world into popular media such as The View and CNN.

“It felt like a really important moment,” D’Souza said, “because contemporary art doesn’t get discussed a lot in mainstream media and culture. I was really interested in the power differential: The museum and the artist have all the power and these protesters have no power—and when they protested, they were called censors. It struck me that in fact these activists, far from being censors, were trying to get the museum to do the right thing, and to act in a way that was reparative, ethical and sensitive.”

D'Souza began her career as an academic art historian, but in recent years has concentrated on her work as a critic because of her desire to engage with contemporary politics. Her writing, which appears regularly in the online magazine 4Columns and in The New York Times, is situated at points where culture and current events intersect. Both contemporary art and works from the past draw her attention.

“I wanted to write for a bigger audience than I felt my corner of academia allowed,” she said. “I was interested in ways artists and artwork had lessons for us about how to operate in the world as individuals. I really am writing about art from which I’m learning how to define my politics, define myself, define my relationship with others in a way that is loving and productive and transformative and politically active and fierce. And I tend to find that both in art that is very political and also in art that doesn’t look political at all.”

At GW, she’ll be teaching courses focused on writing, one called Writing About Others and another called Writing About the Self. She wants these classes to give all participants, including herself, space and time to think about their relation to their subjects, whatever they may be.

“This comes very much out of my own practice as a writer,” she said, “because I often write about art made by Black artists, and I myself am not Black. So, I try to think a lot about what it means to be writing about the art of people who experience life structurally, as well as personally, in a very different way than I might. But I don’t think the question has to do only with race; there are all sorts of ways that we find ourselves to be at a distance from what we’re talking about, whether that distance is identity, worldview or history.”

She is drawn to the work of Black artists, D’Souza said, partly by her desire to better understand issues of race in the United States (she was born and raised in Canada), and partly out of sheer admiration for the work.

“I like looking at the best art,” she said. “There’s been great African American art produced in this country since there were African Americans, but over the last 10 or 15 years, the work being produced by African American artists is some of the best, most compelling, most beautiful art out there. Why wouldn’t I want to get up to speed so I can talk about it in an intelligent way?”

Art objects can help us to better understand the world confronting us every day, D’Souza said, and she hopes to explore the ways it can do that with GW students.

Turning to art for guidance on how to move forward

“It feels like we go from crisis to crisis these days,” she said, “whether it’s current politics, or COVID, or questions of migrants, refugees and borders. I often turn to art and to cultural practice for guidance on how one can move forward. When I was offered the opportunity to teach these classes at GW, I thought that being able to sit down together with students and think about those kinds of questions—questions of power and relationships and of how we can be both curious about each other and kind to each other, how we write about each other and how we encounter each other’s lives and work and experience and knowledge—might be really worth doing at the moment.”

These questions are, she realizes, perpetual conundrums.

“As long as there’s something that we define as difference in the world, there’s going to be this problem of how you face that difference in your own work and your own thinking. It’s more a practice than a problem with a definitive solution. You never get to the end of yoga; you just practice yoga. You keep doing it, and every time you do it you have a different experience of it. I think it’s the same with these questions of encounter. It’s a constant discovery of how to understand the world in a way that respects people’s boundaries, and respects people’s knowledge—and also respects the reality that as an individual, I may not be privy to everything that another person is privy to, and it’s OK not to know sometimes.”

Her dedication to pursuing knowledge is a driving force in D’Souza’s life, and perhaps paradoxically factored into her decision to move away from a full-time life in academia. It is also what excites her about coming to the Corcoran School of the Arts and Design. (She is not entirely new to Washington, D.C.; in spring of 2022, she was an Edmond J. Safra Visiting Professor at the National Gallery of Art.)

“One of the things I wanted to really embody in my practice as a writer was the idea that I am actually not an expert in anything,” she said. “I am constantly approaching my topics as a student, so it was important for me to step away from the role that professorships kind of put you in, where you’re expected to be the expert. At GW this year, I hope to be able to really learn with my students—to go in knowing that I don’t have the answers but can point us to places that allow us to ask a question together.”